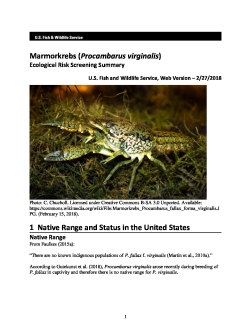 Species that are considered uncertain risk need a more in-depth assessment beyond the Risk Summary to better define the species’ risk to U.S. environments.

The history of invasiveness for Procambarus virginalis is not documented. P virginalis is a parthenogenetic lineage of Procambarus fallax that was created during captive breeding. P. virginalis has become established in Madagascar and Europe, primarily due to the release of aquarium pets and due to its value as a food source in Madagascar. There is much concern over the high reproductive capacity of the species, the potential for established populations to originate from introductions of a single individual, and the close relationship of the species to P. clarkii, for which negative impacts of invasion are well-documented. However, negative ecological impacts of P. virginalis have yet to be scientifically documented. Anecdotal evidence suggests impacts to native crayfish and fish populations, as well as to rice culture. High densities of P. virginalis, achievable through its parthenogenetic form of reproduction, could have important effects on ecosystem processes. The species is a carrier of crayfish plague, and so poses a risk to native crayfish on all continents except North America. Climate match of this species to the contiguous U.S. is high. The certainty of assessment is medium. Overall risk posed by this species is uncertain.

Aquatic Invasive Species
Aquatic invasive species cause tremendous harm to our environment, our economy, and our health. They can drive out and eat native plants and wildlife, spread diseases, and damage infrastructure. We work to protect our waterways and the communities that depend on them from the threat of invasive...
Program
Falls Church, VA

Injurious Wildlife Listings - Keeping Risky Wildlife Species Out of the United States
Preventing the introduction of new harmful species is the only way to fully avoid impacts of injurious species on local, regional, and national economies and infrastructure, and on the natural resources of the United States.
Program
Subject tags
Invasive species