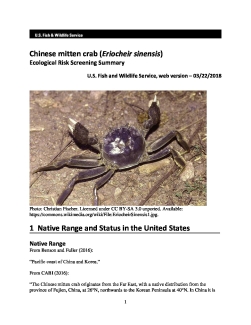 Species that are considered high risk have a well-documented history of invasiveness in at least one location globally, and a high or medium climate match to the contiguous United States.

The history of invasiveness of Eriocheir sinensis is high. It has been introduced and spread to many parts of Europe, Central Asia, and North America. E. sinensis has been shown to have negative impacts on the structural integrity of banks and levees in San Francisco. The impacts of this species on not only the ecology of the invaded range but also the regional economies as well has been documented in gray literature. E. sinensis is a carrier of the crayfish plague, an OIE-reportable disease. The climate match is high. The many of the areas with the highest matches either already have reproducing populations of E. sinensis or have had records of a few individuals without evidence of reproduction. The climate match suggests that there is a possibility for this species to spread further in the United States. The certainty of assessment is high. The overall risk assessment category is high.

Aquatic Invasive Species
Aquatic invasive species cause tremendous harm to our environment, our economy, and our health. They can drive out and eat native plants and wildlife, spread diseases, and damage infrastructure. We work to protect our waterways and the communities that depend on them from the threat of invasive...
Program

Injurious Wildlife Listings - Keeping Risky Wildlife Species Out of the United States
Preventing the introduction of new harmful species is the only way to fully avoid impacts of injurious species on local, regional, and national economies and infrastructure, and on the natural resources of the United States.
Program
Subject tags
Invasive species