The Migratory Bird Conservation Commission was established on February 18, 1929, by the passage of the Migratory Bird Conservation Act. It was created and authorized to consider and approve areas of land and/or water recommended by the Secretary of the Interior for purchase or rental to conserve wetlands and related habitat for migratory birds. In addition, the commission approves funding for North American Wetlands Conservation Act grants that fund public-private collaborative projects to protect large wetlands and associated uplands for migratory birds. The staff support for the commission is provided by the U.S. Fish and Wildlife Service, Division of Realty. 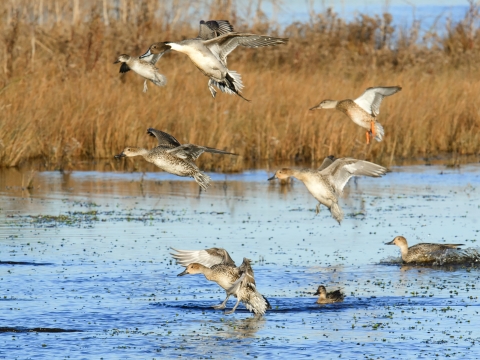 Members of the commission are:

The commission's Rules of Procedure designate the Chief, Division of Realty, in the U.S. Fish and Wildlife Service, as the Secretary to the commission. A. Eric Alvarez is the ninth and current Secretary. Rudolph Dieffenbach was the first Secretary and served for 18 years from 1929 until 1947.

The Migratory Bird Conservation Act also designates the ranking officer or an authorized representative of the department that administers game laws in a given state as an ex officio member to consider and vote on all questions relating to acquisition of areas in that state.

The commission usually convenes two times per year during the months of April and September, or as needed. The Division of Realty produces an annual report, that summarizes the operations of the commission during the preceding fiscal year. 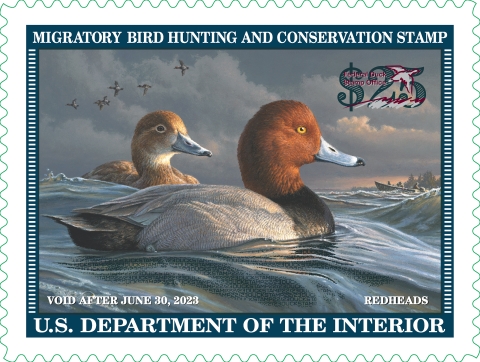 The fund provides the Department of the Interior with financing for the acquisition of migratory bird habitat. There are two major sources of money for the fund. The most well-known source is the revenue received from the sale of Migratory Bird Hunting and Conservation Stamps, commonly known as Duck Stamps, as provided for under the Migratory Bird Hunting and Conservation Stamp Act of March 18, 1934, as amended. The other major source is import duties collected on arms and ammunition. The fund is further supplemented by receipts from the sale of products from rights-of-way across national wildlife refuges, disposals of refuge land, and reverted federal aid funds.

In 1989, the commission acquired the additional responsibility to approve project funding under the North American Wetlands Conservation Act. This act provides for federal funding to encourage partnerships to protect, enhance, restore, and manage wetlands and other habitats for migratory birds and other fish and wildlife to carry out the North American Waterfowl Management Plan. The North American Wetlands Conservation Council, which was created by this legislation, submits project recommendations to the commission for funding approval. Since the NAWCA program began in 1989, it has provided more than $2 billion to benefit migratory birds and their habitats, and more than 6,600 partners have provided more than $4 billion in matching funds, to help protect, restore, or enhance more than 31 million acres of wetlands and associated uplands.

The most recent Migratory Bird Conservation Commission acquisitions were announced in September 2022.