Patuxent Research Refuge was established in 1936 by executive order of President Franklin D. Roosevelt, and is the only wildlife refuge established to support wildlife research. Today the U.S. Geological Survey’s Eastern Ecological Science Center carries on the refuge’s rich tradition in scientific  investigation.

Biologically, the refuge is of regional importance in that it is home to many deep-forest song birds such as the Scarlet Tanager. Patuxent’s large areas of unbroken tree cover, rare in central Maryland, allows these birds to hide from predators.

Currently, the refuge welcomes over 200,000 visitors per year.

Patuxent Research Refuge, established by Executive Order in 1936, is unique among U.S. Fish and Wildlife Service refuges. Patuxent is the only refuge established to support conservation research and habitat management. Research areas have included Whooping-Crane rearing techniques, DDT transmission in food chains, the effects of light and sound on diving ducks, and many more projects that have benefited the nation's wildlife. Since 1996 these projects have been under the management of the U.S. Geological Survey. 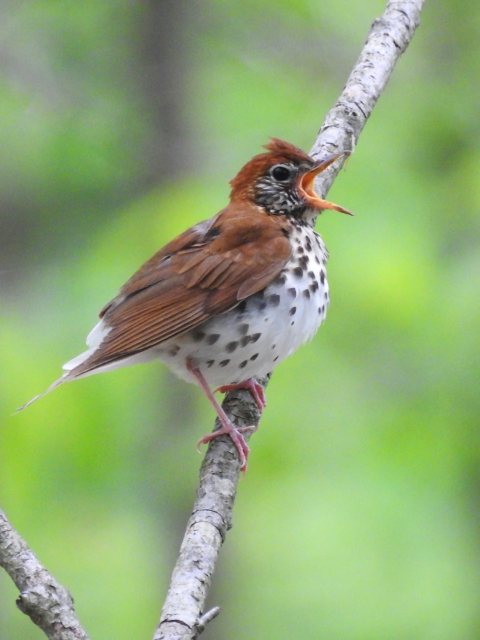 The refuge is the largest block of unfragmented forest between Washington, D.C. and Baltimore, and has been called the “green lungs” of the region. Deep-forest habitats are also essential to songbirds such as the Scarlet Tanager and the Wood Thrush, valued for their beauty as well as for their prodigious consumption of insects. Forest fragmentation and the destruction of forest landscapes result in decreased breeding success for these birds; both species are considered vulnerable due to habitat loss. The refuge is also remarkable for its thriving populations of amphibians, including frogs, toads and salamanders -- all valuable insectivores, and critical components of a healthy and biodiverse community.

Patuxent’s location in central Maryland, an area of high population density, makes this refuge ideally suited to introduce and support public interest in learning about wildlife and conservation practices. These efforts are part of the Urban Wildlife Conservation Program launched in 2012. A key part of our mission is partnering with local community groups to increase their appreciation of local ecosystems and their connections to themand to nourish the spirits of the families living in the area.