Today, the grassy islands and their sheer cliffs protect thousands of nesting seabirds, such as the iconic Tufted Puffin. It is also a favorite haul-out site for marine mammals such as Harbor Seals and Steller Sea Lions. One of the Oregon coast's best-known landmarks, the refuge comprises nine rocks—three large and six small—totaling 15 acres. All of Three Arch Rocks NWR is a designated National Wilderness Area: one of the smallest in the country. 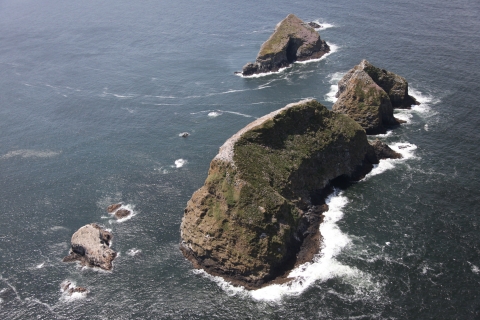 A testament to seabird conservation, Three Arch Rocks National Wildlife Refuge sustains the largest and most diverse seabird colony in Oregon and is an important breeding site for Steller sea lions. Early protection of the nine offshore rocks that define this remote wilderness habitat set a precedent for conservation along the resource-exploited Pacific coastline, symbolizing a change in the way the American public protects and views these marine species. Formed by prehistoric lava flows and shaped by continuous oceanic forces, this wildlife refuge will be managed as wilderness in perpetuity, for the benefit of wildlife and the American people.

Three Arch Rocks was a site of wanton depredation in the early 20th century, when no laws existed to protect wildlife on the islands. Hunters would row the half-mile from shore to the rocks to kill scores of sea lions for their skins and oil, egg harvesters took their toll on seabird populations, and shotgun-toting shooters came to the rocks regularly for target practice.

Luckily, Three Arch Rocks had heroes working to protect the islands and their inhabitants.

Other Facilities in this Complex

What is a Refuge Complex?

A National Wildlife Refuge Complex is a group of two or more refuges, wildlife management areas or other refuge conservation areas that are managed from one central office. Refuges are grouped into a complex because they occur in a similar ecological region, such as a watershed or specific habitat type, and have a related purpose and management needs.

The Oregon Coast National Wildlife Refuge Complex is managed from our headquarters in Newport, Oregon. The office located at Bandon Marsh NWR serves as a south-coast field office.